Probably the largest military fort in Europe can be found at Fort George in the Scottish Highlands.

Located a short distance from Inverness.  This huge fortification is still functioning as a military base even today.

Fort George Highland Regiments museum on the far right of this building.

Built after the defeat of the Jacobite’s at the nearby Battle of Culloden in 1742.  In order to secure a base for the army of George II.

Fort George ramparts are a marvel .

Although it took nearly 22 years to complete.  Now some 250 years old and the defensive ramparts visited today and are in the most remarkable condition.

Wrapping around them for over a mile the ramparts encircle main garrison building and storerooms.

One key visit should be the Highlanders Museum.  Located to the right as you enter the through the main tunnel and in the building facing you.

The museum houses Scotland’s second largest collection of military artefacts outside of Edinburgh.

Fort George one of many Highland regiment’s Victoria Crosses on show.

Broken down into regiments and time periods the exhibition covers from just after Culloden to the present day.

Highly prized medals won by the soldiers are featured.  Lead by of course, many Victoria Crosses.  The highest of military bravery awards.

A box once belonged to Hitler taken from the Chancellery in Berlin by Lt Col Richard Broad MC.

Flooding by the sea if under attack is possible.

Although, a current military base you are free to wander around most of the fort. It does seem rather strange to walk around with many service personnel carrying out their normal military duties.

A Japanese flag captured at the key battle of Kohima.

Navigation around the fort is simple as there are many signs placed around it. Audio guides are available as are down loads to mobile phones. Do allow at least a couple of hours!

There are toilets and a café.  With the current Covid protocols in operation. There is a shop for the fort and a shop in the Highlanders Museum too.

Fort George Has A Commanding Position

The fort sits on a peninsular has extensive views over the Moray Firth and back to Inverness. Its not unusual to even spot bottle-nosed dolphins that inhabit the estuary. 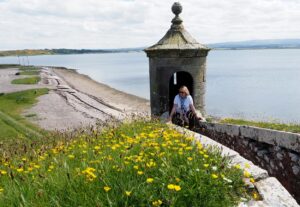 Look out towers with views of the Moray Firth.

However, the defensive ramparts are a miracle of engineering and the size and scale are to be marvelled at.

Rows of cannons on show.

Sheer unguarded drops are a potential hazard however the views over the Moray Firth are well worth it.

Motar and cannons to defend the fort.

Furnished with a charming chapel within the garrison which is thought to be designed by Robert Adam.   The Adam family connection does not end there.  As it had much involvement with the building of the whole fort.

Soldiers room from the Victorian period.

Here are many battle honors on display in its very tranquil and somber interior. 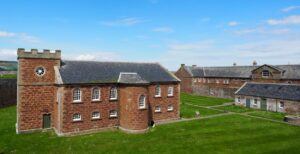 Booking Online Is Best In The Current Covid Times

Admission to the whole fort complex is:

Plus a selection of family tickets too.

Members of the English Heritage and the Welsh equivilent Cadw get half price entry. Opening hours are from 10am until 4pm.

A very stylish way to protect your contactless bankcards from possible data theft this unique and brand new to the market carbon fibre clip is on the way made by Ogon.

Can you spot the giant fridge magnet from #Tunisia

Trying hard to do the correct thing and then you h

New and old @maiersports trousers at #Carthage in

At last getting out of Europe. Here in #Tunisia

Amazing interior of the Dar Bel Hadj restaurant in

Found on Bath Road next to #Heathrow he is safe an 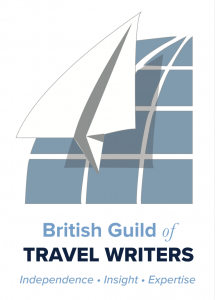